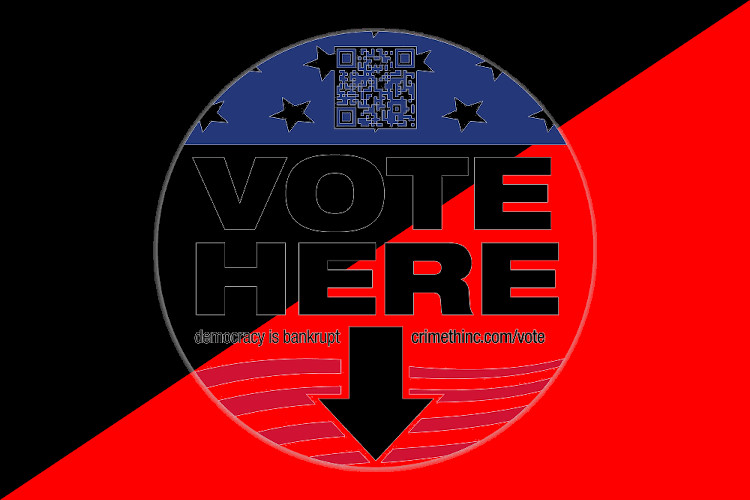 As the United States continues its decent toward an overt autocracy that it began many decades ago, there’s no mistaking the fact that electoral representation is not a substitute for material power. As the nation gears up for what is arguably one of the most highly contentious General Election seasons in a long time, permit us a few moments to share some timely thoughts with you.

We want you to vote (to help soundly oust Trump from the Presidency), but we want you to do it while recognizing the reality that voting is literally the least you can do in pursuit of that goal. To vote while incorrectly believing that your vote is more meaningful than basically anything else you can do to establish material power in your life and community is to mentally ingest a toxic political sedative that poisons your participation in society and degrades your material power. Recognize that the “I Voted!” sticker you’re bound to see on people’s backpacks and phones this November is usually not a badge of genuine political engagement, but rather a tranquilizer patch doling out time-release political anesthetics.

Look, vote all you want. (Really!) But don’t naively assume your vote will meaningfully change how, why, or when the Amerikkkan government will still spy on us, its jar-headed, jack-booted government-funded white supremacists who traded their white cloaks for their camo fatigues or their badges will still terrorize us, and its social services will still turn us away due to lack of funding, lack of competency, lack of empathy, or all three. Red or Blue might as well be Coke or Pepsi, with maybe a touch of cyanide in one or the other depending on which Facebook filter bubble the Zuck has decided your timeline should show you.

Here are the facts: you have one chance to vote for your representative as President every four years, but you have at least 365 chances to increase your material power in this world each and every year. Seen in that light, elections matter a lot less than they’re made out to.

Most people wrongly think voting is the most profound political act they can take because it somehow directly determines their future, when in reality all it amounts to is at best a false choice between one poison pill or another. Freedom doesn’t come from a ballot box. On the ballots most people talk about, no candidate gives a shit about you. Why should they? The entire apparatus of Nation State government is designed to reward people who don’t give a flying fuck whether what they do with the power of their office is legal, ethical, or even sensible. Importantly, that fact isn’t a Trump phenomenon, either. Powerful people in government have been brazenly boasting about this since at least 1975, when contemporary Mr. Realpolitik himself, Henry Kissinger, is quoted in one conversation saying:

I used to say at meetings, ‘The illegal we do immediately; the unconstitutional takes a little longer.’ [laughter]

(Source: The US diplomatic cables provided to the world by Chelsea Manning. Look it up.)

So people vote, but little if anything improves in their lives as a result. Then, by the millions, frustratingly, they just wait. For four years. Even most of the “activists” who aren’t just sitting around twiddling their thumbs start doing…what, exactly? Oh yeah, their much-lauded, highly publicized, celebrity-backed Get Out The Vote campaigns. This is not the behavior of a body politic actively engaged in their own governance. This is a body politic addicted to societal-scale political sedatives.

If you want to change your political reality, you need to start by becoming more powerful than you currently are. What do you have that is actually real, meaningful, political power? Do you have money? Do you have connections to or influence over a lot of other people? Do you have remarkable individual skill that you actually use in your personal or communal spheres to improve your life and the lives of the people you care about? If you don’t have those things and, let’s face it, most voters don’t, then you don’t have any actual power. And without any power, hard as it is to hear, everything you do—even and arguably especially your vote—doesn’t make a dent.

Voting is not how you express your politics. Voting is, at most, one tiny and relatively insignificant artifact that results from your true political expressions.

At Tech Learning Collective, our goal is to make it easier for you to do the far more meaningful political work of building real, material, concrete power in your own life through mastery over digital tools and information systems. Creating an autonomous infrastructure that can obsolete this whole rotten system from its root is obviously more impactful, and thus arguably more important, than voting. But so is just asking the question, “Wait, how does this actually work?”

Put another way: Fuck Trump? Well, duh. But fuck having Presidents? Now you’re speaking our language. Your vote can be—and will be—ignored. Your resistance can’t be.