The Web as a Language: What No One Ever Told You About HTML That You Didn't Know To Ask 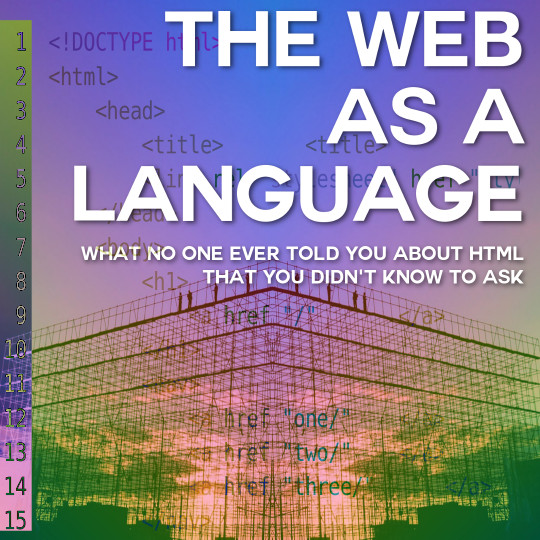 To take full advantage of the Web, especially as a digital publishing medium, you need to start by using the full expressive power of its most fundamental part: the simple HTML “Web page.” This workshop covers HTML, the HyperText Markup Language, as though it were a language in which you can write poems as well as tables of facts and figures, because it is! Learn how to structure your pages in digital rhyme and meter and find out why this approach results in better code for both beautiful designs and automated processes.

The Hypertext Markup Language (HTML) is the de-facto standard for publishing information online, a kind of digital equivalent to learning to read and write. Why, then, is it so rarely explained in terms of the language that it actually is? What is HTML’s grammar, where do HTML “sentences” begin and end, and how is meaning represented in its elements? You don’t need a computer science degree to learn a foreign language, and that includes HTML.

This workshop is designed for anyone who ever wanted to toy with HTML once or twice, whether it was in the 90’s or just last week. Based on a portion of the Tech Learning Collective’s WEB101 course, it is a remarkably thorough treatment of some of the Web’s most powerful and most-often overlooked parts. Covering the structure of HTML and extending to the richness of semantic data formats like Microdata and RDFa, learn how to write in the Web’s native language so that both humans (like your friends and comrades) and machines (like Google!) can find, use, and most importantly understand what you’re saying.

Upcoming “The Web as a Language: What No One Ever Told You About HTML That You Didn't Know To Ask” Events